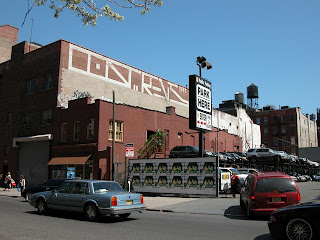 The above photo represents the very first REVS piece I had ever witnessed. Wet behind the ears
and completely clueless as to the story behind him and his work, I kept moving
through the streets of New York always keeping an eye out for that huge REVS piece.
REVS is most widely known for his large pieces painted with house paint and paint rollers, high atop
the facade of many buildings. It is easy to say that this man "gets up" anywhere he can
risk his life, or create a massive piece that everyone can see from thousands of feet away.

Most people who see the work of REVS are used to only seeing the huge block letters
he paints, but upon further review, there is more that you didn't know. 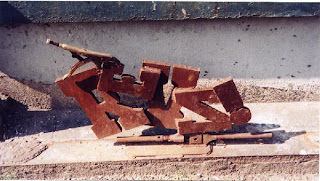 New York city graffiti artists spend their time creating late at night, in deep dark places that
you and I wouldn't go to in our wildest nightmares. These artists are constantly in unison, choreographing a paint induced dance with one very strong material: Metal.
After years of creating graffiti using paint, REVS decided to
take his art and his creativity to the next level by creating some of the most permanent
street art I've ever seen. Rather than spend all of his time outside in the streets,
REVS creates metal graffiti in his metal workshop, then finds some very discreet and
poignant places to weld his art up to. 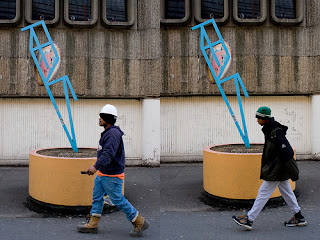 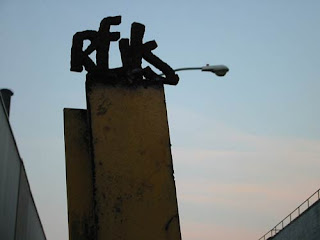 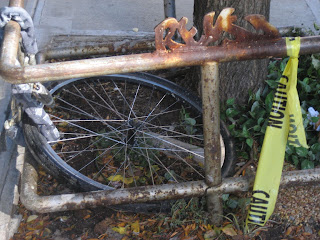 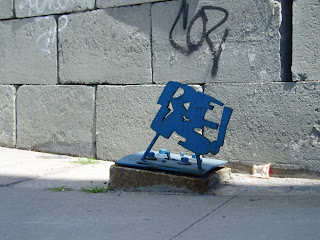 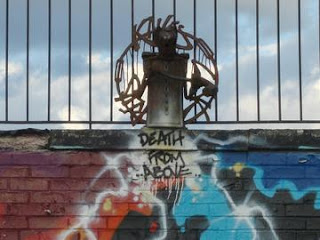 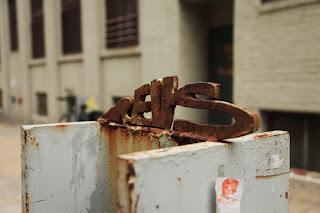 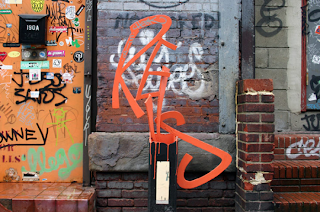 As if you felt that the metal graffiti was some, "next level shit", you are clueless on the rest of REVS' story. After conquering the graffiti game high up in the air, permanently welding his work to
the city itself, REVS decided to take on: the underground. 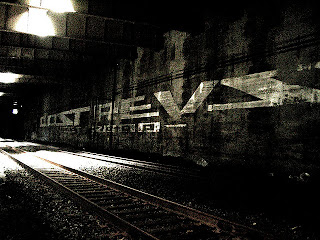 Made famous by the documentary, "Dark Days", there is a deep and dark under-belly to New York City that almost none of us will ever experience. Created over 70 years ago during
New York's early architecture years, there are tunnels and passageways that our modern subway lines just do not go. They are closed down to the public and only open to MTA workers who are there to repair or fix something, but there is the rare occasion that regular folks adventure down into
the belly of the beast.
Enter REVS. 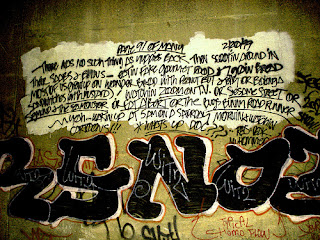 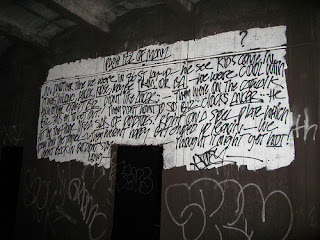 Treating this whole new area and underground life as a new canvas for REVS to work on,
he began writing his auto-biography on the walls in free flowing thoughts.
Now if you take into consideration the location of all of these paintings, almost no one would
ever see what he wrote and you start to understand more about REVS as a person than an artist.
New York City Vandal Squads were furious with REVS and the amount of money it has cost
to remove the paint, stickers, metal and marker that REVS had spread over the 5 boroughs.
New York City police hired a task force to study REVS' work and find his ass.
And they did.
When they finally caught REVS, the cops and the city slapped a heavy duty fine on him.
Basically the police take photos of all of the graffiti in New York, where it is then transferred to a data file which links the alias and all related artwork to that alias.
So when you are an all city graf artists like REVS and the cops start to search through their database...
your ass is grass.
Police were very curious about one thing... How was it that REVS was able to paint almost 200 paintings in the underbelly of NYC without anyone batting an eyelash?
REVS would dress up in MTA gear that matched all the workers in the subway system,
so no one ever questioned why he was down there with paint and supplies in hand.
Sneak, sneak. 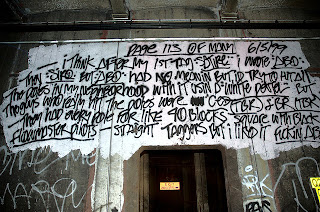 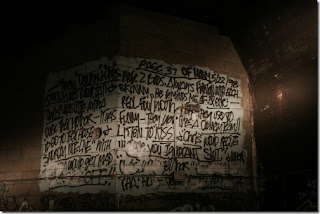 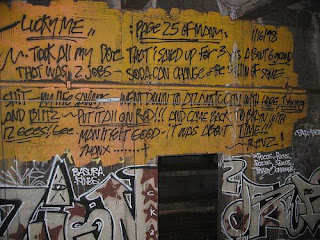 Special thanks to: Wouldn't it be cool if instead of Easter baskets filled with candy and eggs... if they sold big chocolate caves with a little marshmallow Jesus pushing the door to the cave open to Resurrect himself? I would buy that.

Posted by upperhands at 1:32 PM